Pictured above: Sydny August by Molly Rose. Photo courtesy of the artist.

Sydny August, now signed with Lil Durk’s record label, Only the Family, has been making waves in the Chicago music scene since her teenage years.

Recording her first EP 6th Floor from her sixth-floor University of Kansas dorm room — the first of six projects released before she completed her undergraduate education — Chicago R&B artist Sydny August was initially noticed by Lyrical Lemonade in 2017, when she was 20 years old. After independently releasing her debut full-length album Miss August during the height of the COVID-19 crisis in 2020, August signed with Chicago record label Only the Family and collaborated with founder Lil Durk on his sixth studio album The Voice.

August’s latest single, romantic R&B ballad “How Does It Feel?” released Feb. 13, was featured on Vocalo’s “In Rotation” playlist for December 2021. We heard from Sydny August about signing with Only the Family, the sounds of Chicago and her experiences recording Miss August and “How Does It Feel?”

Tell us about when you were first signed to Chicago record label Only the Family. What was your initial reaction to getting signed? How has that group of artists impacted you?

After being independent for five years, I saw this signing as a new chapter and opportunity to challenge my artistry. I appreciate how [Lil] Durk approached me initially, showing immense support and later wanting to sign a Chicago artist like myself. Traveling to Atlanta for recording sessions allowed me to gain impactful insight by meeting creatives outside of the label, making songs like “How Does It Feel?,” learning different recording techniques through co-write sessions and just listening to other creatives’ stories to understand and bring more of a connection to the process.

When did you first start seriously pursuing music? Did you always want to be a singer?

I’ve always wanted to be a singer, or work in an ice cream truck, haha. I grew up in a creative environment. First started seriously pursuing music my senior year of high school, around 2015 or 2016. That’s when I realized that I wanted to independently pursue a solo career.

In middle school I took vocal lessons, sang in plays, played drums in a band, began learning piano and guitar … which led to YouTube covers. However, attending the fine arts music program at Senn High School prepared me for live performances and collaborating with other creatives.

We read in your bio you attended the University of Kansas for college. What did you study? What’s the biggest lesson you took away from those years?

I studied english creative writing, with a minor in business. What I took away from my years at Kansas was learning to manage my time — since it was important to me to separate my school work from my creative work. And, in doing that, I was able to release about six projects beginning with my freshman year, through the pandemic, to graduation.

Your last record, Miss August, was released during the height of the pandemic, and seems very influenced by your experiences in lockdown. How has the pandemic impacted your music?

I had some reservations about releasing my debut album during this time. Music has been second nature to me and brings me healing and clarity. I realized that the world needed healing, more good feelings and, overall, love. That’s what Miss August is about—the ability to overcome, grow and always come back to love.

Walk us through the songwriting process for “How Does It Feel?” What motivated you to write that song?

It was the last song of the night and I had not eaten at all the day of the session, so I stepped out of the room for a bit to take a break. When I came back, the initial guitar phrase of the song, sounds by Zeryus, was playing, and I thought, “Wow, this is a hit.”

The song wouldn’t have been possible without Jason Daxon, a writer whom I met during Atlanta sessions. He introduced me to a whole other recording process that I frequently use now. We went back and forth with lyrics, which led him to go into the booth to record a demo. Then I flew back to Chicago, recorded the infamous hook and began writing the rest of the song, inspired by the hook, in my home studio.

What does being a Chicago musician mean to you?

This city is so eclectic because it has a diverse artistic spectrum. To me, being a Chicago musician means reflecting and sharing not only your personal stories but having an impact on your audience that relates back to you.

Describe your experience in the Chicago music scene. Do you feel a strong sense of community? If so, in what ways?

I was first introduced to one of the many Chicago music scenes in high school by artists like Chief Keef, Durk, Chance, Tink, but experienced the underground side of the music scene too.

The underground scene is where I began to network and perform aside from high school. A number of kids would curate shows around the city incorporating and featuring friends who were up-and-coming fashion designers, like Kim Products, Kristopher Kites, Wavs1017, and musical artists like Kari, Nina Tech, Chase Alex. There was a huge support system … This is where I was introduced to more artists like Lucki, Saba, Plu2o Nash, Taylor Bennett, Warhol.ss, Ravyn Lenae, DJ Kenn, etc.

You wrote on Twitter in September that you want to work with more local artists. Why is working with other Chicago-based artists important to you?

We should build relationships with each other, especially if we come up from the same city. It’s important to have a creative team you trust and reciprocate that support. Supporting local underground artists is an opportunity to keep Chicago on the map together and to show that there’s a variety of talent to Chicago than what’s seen on the surface.

Who do you feel is shaping the Chicago sound these days? In what ways?

We all find inspiration somewhere, I don’t believe there’s just one Chicago sound. There could be different reference points depending on one’s musical perspective. When I think of the Chicago sound, I think of both drill and soul. Off top there’s Kanye, Sosa, Saba, Common; different styles raised in the same city.

What is your favorite way to spend a Saturday in the city?

Walk around Wicker [Park] with my sister, maybe thrift at some Village Discount, in the summer go to Miko’s, create with my team.

Anything else coming up your fans should know about?

And if you’re a new fan, welcome! Go listen to my discography and let me know your favorite project of mine. Sydnyaugust.com.

The O’My’s Return With “No Swimming” EP 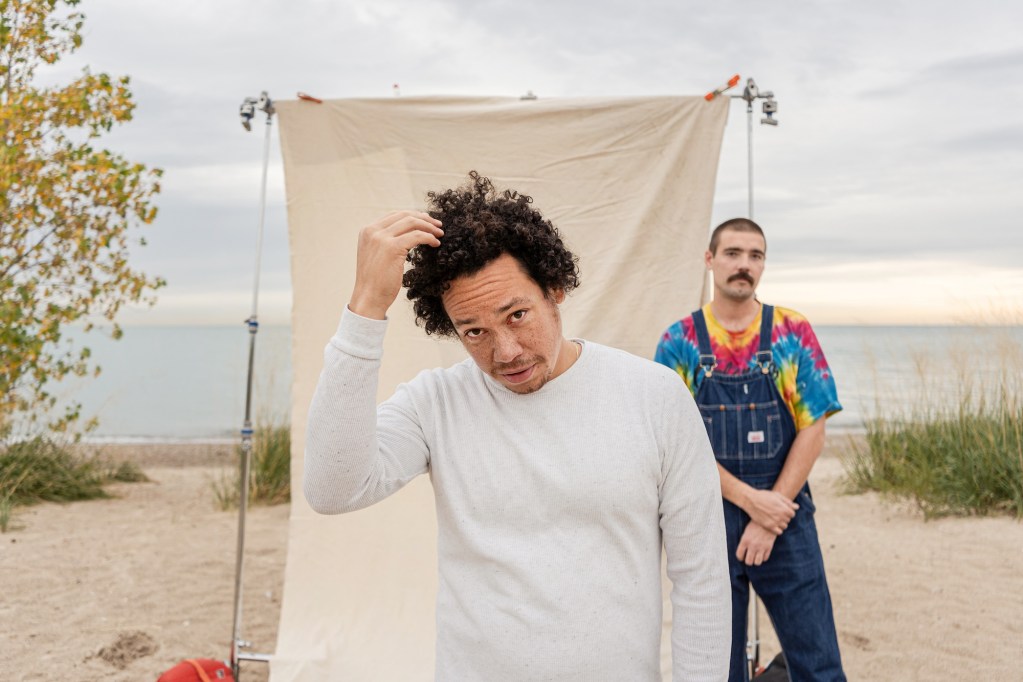