When he’s not studying to be a therapist or helping community members find housing at a nonprofit case management job, Samer Owaida is in the streets: organizing, advocating and liberating himself from past traumas.

Owaida originally moved to the Chicagoland area from Palestine in 2001 at a mere 5 years old. It was in Chicago where he grew through emotional abuse, financial struggles and faced the stigma of being a queer Palestinian person.

Now, he is studying to be an art therapist specializing with Black, Brown and Palestinian children – striving to become the model he yearned for as a child.

Owaida has been an organizational force within many liberation efforts and has worked with activist groups and events across the city for years, one of which being 2020’s “Pride without Prejudice” as an alternative to that year’s canceled Pride March, which Owaida describes as “corporate.”

Only recently, Owaida’s work has shifted from large-scale to internal liberation. His efforts now take a psychological and spiritual approach to his own traumas, liberating himself from a lifetime’s worth of turbulence.

“I’ve kind of moved more away from mass organizing, and more into organizing in my personal life,” Owaida described.

Through his work as a supportive housing case manager by day, organizing activist efforts and his own mental health journey, and a grad student studying psychology by night, Owaida aims to reach beyond solidarity.

“I want to organize events for folks to come and just heal,” he explained. “I want us to be humans with each other, in a different way.”

On this segment of “This is What Chicago Sounds Like,” Samer Owaida explains his liberation efforts, astro-hypnosis and his aspiration of being a trauma-informed abolitionist psychiatrist.

I’m 26, and I’m Palestinian. And I’m queer and aspire to be an abolitionist, I’m starting to say that now. From nine to five, I’m a supportive housing case manager at a nonprofit. I was hired the first day of quarantine, and it’s the hardest job I’ve had in my life. It was my first time engaging with Black trans women without housing. I’m their housing case manager, so I am responsible for their housing. I’m responsible for supporting them in finding housing, advocating for their housing, processing their lease paperwork, and all the bureaucratic stuff that comes with it. And then after nine to five, I have the pleasure of being in graduate school.

I want to be a therapist. My goal in life is to do play and art therapy with Black, Brown and Palestinian children. I want to give a lot of boys in our community an older male — not to dip into gender, but an older male figure that I didn’t have. That I know I really, really, really needed, and still need and still wish I had, even as an adult queer man.

I was born and raised in Palestine. I was born in the West Bank in 1996. My family and I came here in 2001, during what was the Second Intifada, which was this sort of uprising and revolutionary armed resistance against the occupation, against the genocide and ethnic cleansing and the land theft that my people are experiencing. And so, while that was happening — while there were curfews where we were only allowed out like once a week, while there were bombs dropping, while there were tanks on our streets and buildings being blown up and destroyed — my father was in Chicago, preparing all the paperwork for us. He was already a U.S. citizen, so we came in 2001. We lived in Hickory Hills in a two-bedroom apartment, about an hour away. But when my little brother Mohammed was born, he was the youngest of four, my parents moved from Hickory Hills to Bridgeview.

“I want to amplify, I want to build connections, I want to move beyond solidarity.”

My journey in Chicago has gone from a journey of scarcity to a journey of abundance. Something about Chicago, relationships feel so natural and so divine, and so organic. And I love that we’re a big, small city. Chicago has a unique type of white supremacy, every city does. And what I think, what Chicago means to me, is that… Chicago has been a lesson. I don’t think I would have made it in any other city. I’m in Chicago, because this is where I was meant to be, to learn, to grow, to heal, to break, to be flawed, to make mistakes. As hard as it’s been, I have not received anything I was not ready to take on. And I always think of this quote, that “I may face many defeats, but I will never be defeated.” And I think that’s what Chicago has been for me, it has been many defeats. But as time goes on, I’m realizing that I’m continuing to grow as a person. And I have not been defeated. I’m still winning. It’s not easy to live in Chicago, but we’re not easy people. We’re complicated, big brave people.

What did your activism look like before you started to work on becoming a therapist?

Pink-washing is the use of queer politics, queer bodies, to gloss over the violence, whether it be a corporation or a government. It’s this idea that corporations realized, with the rise of gay cis men, particularly white men, who are developing capital, that is a demographic that they can tap into, to sell products to. We had like 7,000 people come out, and we had a huge turnout. And I spoke.

And I spoke about the fact that we live in a city where we — or, we live in a society, we live in a world where we memorize and learn the names of white supremacists, and of rapists and of pillagers and of these horrible violent people. And, right off the top of my head, and probably your heads, it would be hard for us to name, just real quickly, a Chicagoan who was the victim of white supremacy. It might not be too hard, if we sit and think maybe we can come up with the name of somebody. But we don’t have the streets named after them. We don’t have statues for them.

How do we honor Chicagoans in our life? I used to just be big at protests… I want to talk about Palestine, I want to be on the megaphone. I want to amplify, I want to build connections, I want to move beyond solidarity. And I want to move towards joint struggle, and teaching folks that we all have a stake in each other’s liberation. And so I was going from these big, beautiful, bold ideas of liberation. And then, I think, the adult world and life kind of… broke me a little bit, they broke my heart a little bit. And it caused me to shrink myself. But in shrinking myself, and through this process of building myself back up, I have found some really beautiful, intimate lessons these last few years. And now I’ve kind of moved more away from mass organizing, and more into organizing in my personal life.

I want to organize events for folks to come and just heal. I want us to be humans with each other, in a different way. I’ve shifted more towards that, and that’s maybe the therapist in me speaking. And that has felt more natural. It’s felt like it aligns more with my capacity.

“…building a life for yourself is so freaking hard. It’s so incredibly difficult, but it is worth it. And I have to tell myself that it’s worth it.”

I have to know who I am. And I have to know who’s with me, and who wants me here. I’ve been doing a lot of astro-hypnosis; I wanted to do something more spiritual than just talk therapy. Talk therapy can be spiritual, but anyway, in that session I really got to connect with my past selves, my future selves. Who am I going to look like in the future? Who am I going to be? I am that person, I can tap into that person. Just because they’re not here doesn’t mean I can’t. And so, by virtue of reconnecting with my past selves, my present self and my future self in these sessions, I got to connect with my grandfather, who I only met once, who transitioned from this world a long time ago. And I got to connect with my grandmothers. And so I realized that there are people who are rooting for me, who want me to be here, to do the work that I’m doing. That is aggressively transformative, that is aggressively anti-capitalist and abolitionist, and staunchly anti-white supremacy. I know there are people who are not just physical, who are always with me.

Keep up to date with Samer Owaida on his Instagram.

The Reel Critic: What To Expect At The Chicago International Film Festival 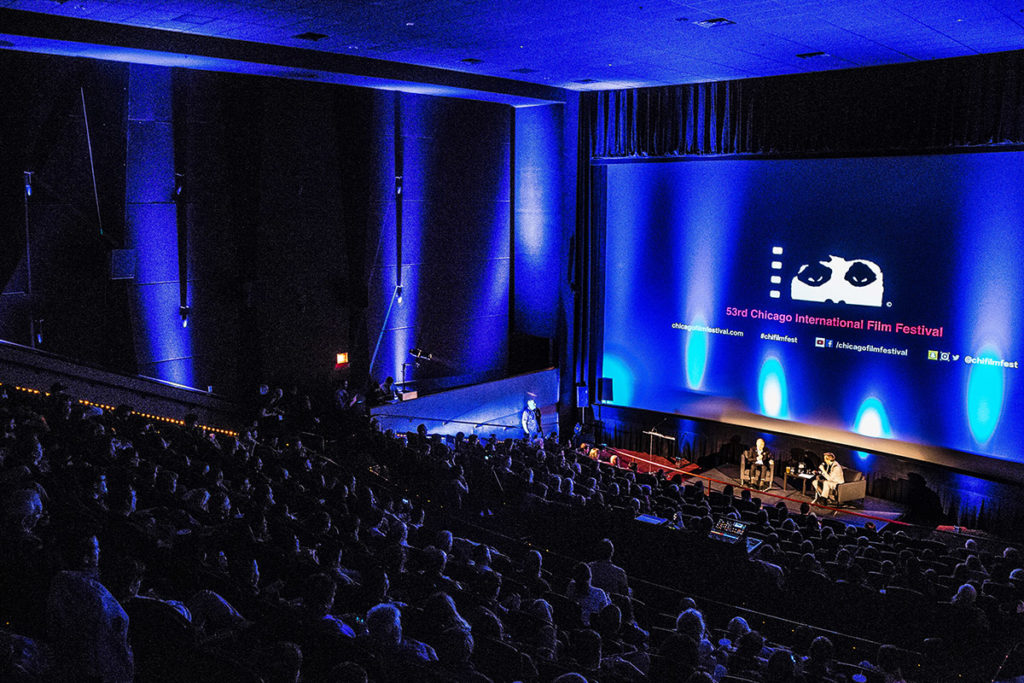