Growing up in Des Plaines, Myron Laban has been making art his entire life. Upon moving to the city to attend college at UIC, Laban became fascinated by the city’s murals and muralists, among them Hebru Brantley, Sentrock and JC Rivera, and created his first mural in 2017. From there, he’s had his work displayed all over the city and the world — from the United Center to Barcelona.

Though visual art has always been his focus — earning praise from outlets like the Sun-Times, Daytime Chicago and Block Club — Laban has also held within a deep love for music and a drive to create it. Two years ago, he released his debut single, “Loverboy,” in collaboration with his long-time friend, Chicago hip-hop artist and producer Mayes.

“Over the years… I would send him little songs I made on my phone, and he saw the potential in my terrible quality demos,” Laban recalled. “Fast-forward to 2020: I wanted to make a song for real, so I hit up Mayes with an idea from a voice memo of me playing my ukulele… and from there we just kept going.”

Now, with hopes to blend visual art and music, Laban and Mayes released their debut collaborative EP Feel this August — accompanied by an immersive art experience-slash-listening party at Chicago Beyond Gallery in Fulton Market. His art would become the foundation for creating his music.

“I knew introducing myself as a musician to the world would be a challenge, because I’ve never really shown that side of myself,” Laban explained. “So I decided that I’d bring people to the music through the art.”

Laban’s art gives his audience a deeper understanding of his music and vice versa, something, he notes, has always been his hope.

After “Feel,” the lead single off the EP of the same name, was featured on Vocalo’s “In Rotation” playlist for October, we heard from Myron Laban about the single and its music video, the EP (and accompanied art installation), painting murals and his future endeavors.

Are you from Chicago originally? If not, where did you move here from, and when/ why did you decide to move here?

I was born and raised in Des Plaines, Illinois. It wasn’t until college when I started living in Chicago. I’ve stayed in different places like Little Italy, Avondale and around UIC. I love Chicago so much, it’s so rich and diverse. I feel like people here help build each other up in regards to art and music. Everyone supports each other and helps push the boundary for what we can achieve as artists.

How did you and Mayes meet and begin to work together?

We met at UIC one summer during a Black male retreat, when we were 18 and 19 years old. The following school semester, I would see him around school playing his guitar everywhere he went. I remember Mayes showing me an EP he had on Soundcloud and I was like, “This guy is different.” It felt like hip-hop and the band Explosions in the Sky had a baby. I really believed in his music, so I started making cover art for his songs. Mayes even performed on Sway a few years back.

Over the years we kept in touch, I would send him little songs I made on my phone, and he saw the potential in my terrible quality demos. Fast-forward to 2020: I wanted to make a song for real, so I hit up Mayes with an idea from a voice memo of me playing my ukulele. That song became “Loverboy,” and from there we just kept going.

Your song “Feel,” the EP’s lead single, was added to our “In Rotation” playlist for October. What do you want your listeners to “feel” after listening?

I’d really like for the listener to appreciate the song for how dynamic it is. I describe it to people as a musical rollercoaster — it takes you on a journey to different places. It feels like a movie. There are so many aspects to the song, but each piece works together like a puzzle piece.

What was the concept behind the music video for “Feel”?

I wanted to create a short film. I’m not a huge fan of music videos where the artist lip syncs the music. I think creating an intriguing narrative was more important. The idea for the film revolves around me running with a bouquet of flowers. The first thing that comes to mind is that I was running to give it to a girl. However, a good story is always unpredictable, so that’s not the case — you have to watch to the end. Simultaneously, there is B-roll of these intimate moments of family members, couples, kids, etc., to emphasize the idea of “feeling.” It’s about more than romance. Simple things like dancing in the living room at a family function or fishing with your kid is just as beautiful. Lastly, the music video is a representation of me as an artist. You see me painting, dancing and standing in front of my own mural in the West Side, all of which are aspects of who I am as a creative.

What was most challenging about trying to conceptualize the song visually? The easiest part?

The hardest part was figuring out how to make a visual that wasn’t predictable or done before. I feel like any great show or movie will keep you on your toes or do the things that you least expect. Fortunately, I worked with incredible directors, Geno DiMaria and Kory Powell, to help bring this song to life. There were a few ideas of how we wanted to represent the song visually, like taping my mouth and being more performative — because the lyrics say, “I don’t know what to say” — or a basic guy chasing girl storyline. Geno and Kory took some of my initial ideas and combined it with their own ideas of me running with the flowers and filming around Humboldt Park to make it more visually interesting… The easiest part was being able to work with a team to bounce ideas off each other.

Where did the idea to do an immersive visual EP come from? How did you go about planning that?

Everyone I know knows me from my art shows, to my murals around the city, to the hoodies I sell. I knew introducing myself as a musician to the world would be a challenge, because I’ve never really shown that side of myself. So I decided that I’d bring people to the music through the art. Originally, my idea was to create an art show where every painting represented a song, but I realized I could do better. I created an art installation for each song, where it incorporated visual, audio and physical elements to create a world in which the viewer could live in the song. It took months of planning. Each room was super unique. For example, one room was a recreation of a painting based on the song “Kitchen Floor.” We even had someone hand sew a blanket based off the blanket in the painting. I created a lot of art for it, too, ranging from sculptures to paintings.

You’re also a muralist. How did you get into painting?

I have been making art my whole life. It wasn’t until 2017 when I started making murals. At the time, I was living in Chicago and looking at artists like Hebru Brantley, Sentrock, JC Rivera and Mathew Hoffman, and I noticed how they would take one idea or character and recreate it in a bunch of different ways. Around that same time I started my brand “uplift” and realized the most public way I could share it was through street art. I originally found spots off the CTA Blue Line that would be visible and started painting my murals. After that, I just made it a regular thing and painted murals all over the city, even internationally in places like Paris and Barcelona.

What’s a piece (in terms of visual art and murals) you’ve created you’re most proud of?

I have this DeMar DeRozan piece I recently made for a Chicago Bulls Art Show inside the United Center. It’s pretty big, and one of the greatest pieces I’ve ever made. It’s significant because I’ve been creating basketball paintings for a while now, and I always told myself that I would make my art so good that one day I would work with the Bulls.

Working with Bulls has always been a dream of mine, so when I got the email from the curators at All Star Press, I teared up. I made sure to make it one of the best paintings ever, given the opportunity. I was even told that the Bulls sent the painting to DeMar, which is wild.

Do you feel like your background in painting and visual art lended itself to conceptualizing your visual EP?

Absolutely. I knew that everything I would do musically would be represented visually through my skills as an artist. My goal has always been to combine my practices in a way where they could live together.

Do you think you express yourself more through the art of singing or painting? Elaborate.

I think I express myself differently with both mediums. I definitely create a lot more art than I do music. In painting and drawing, I feel like I’m more articulate at expressing a full spectrum of emotions. I’ve been creating art for years, and so I’ve gathered a lot of skills along the way. If I wanted to make something happy or sad, I could.

In music, I found that talking about the more intimate parts of my life feels more natural than painting. Some of these songs came from vulnerable moments in my life, like “Loverboy” and “Kitchen Floor,” and music was always there as an outlet to express how I was feeling in that moment. They were never made to be songs I record on an EP. It was me just sitting in my bedroom creating something.

You’ve had your fair share of live performances! Do you have a pre-show routine to calm your nerves before getting onstage? If so, what is that routine?

I’ve honestly performed live only a handful of times. Therefore, I have no routine. I do like to make sure I don’t have to go to the bathroom though!

What’s your dream location to perform? What is the significance of that place for you?

I would love to get on a late night show with Maurice and perform one of our songs. That’s honestly my dream. Just to see us go from making music in our bedrooms to spreading it through a nationwide broadcast would be monumental and life changing. Our music is universal, and I know it would be received so well.

What’s next for you musically, artistically and personally? Anything you want people to look out for?

I’ve kind of taken a step back from big projects. I’ve just been honing in on my visual art style, the stories I want to tell with my art, and the direction I want to take with my music. I am working on a music single at the moment with an incredible producer named Timmy V. However, I do plan to drop a lot of art in 2023, so just keep your eyes posted. You can follow my journey best through Instagram @myronlaban. 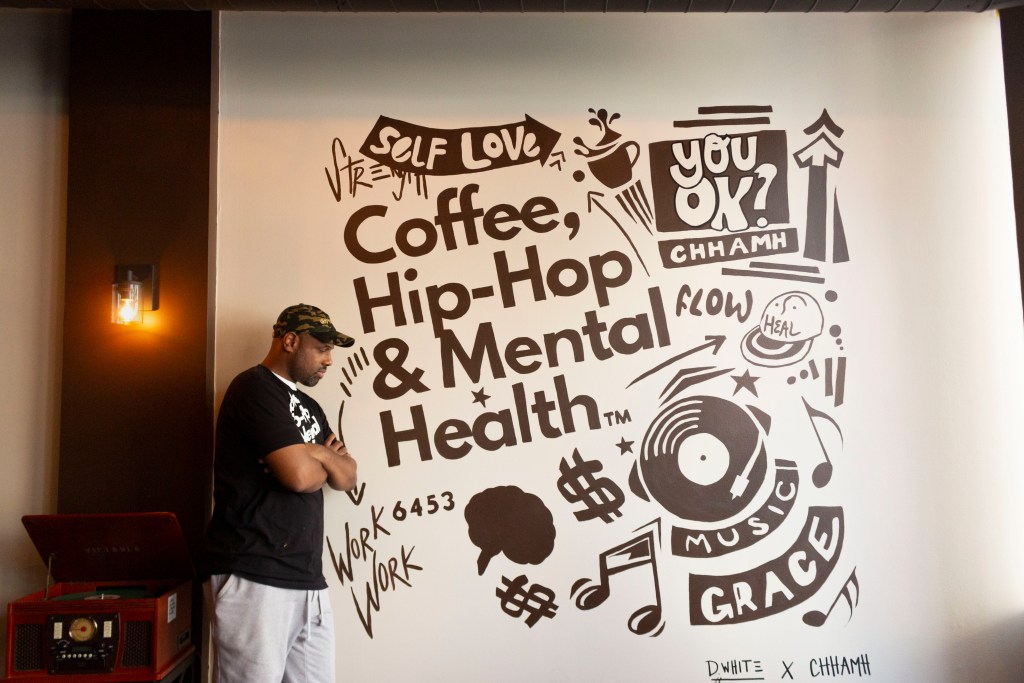 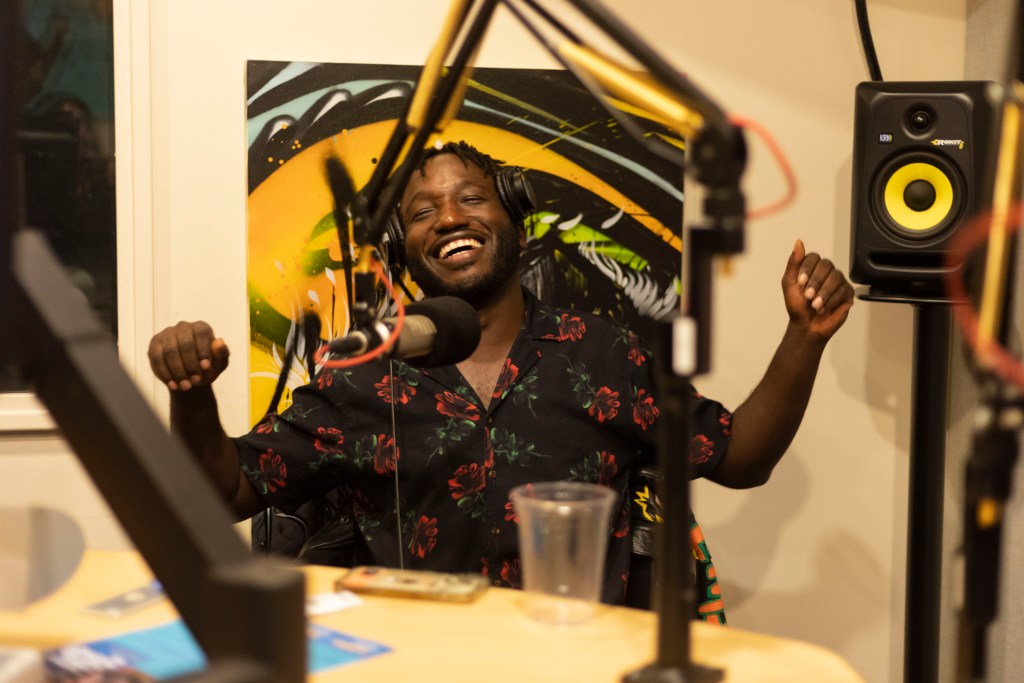