Chicagoland artist Mister Castle is no stranger to the city’s underground hip-hop scene.

Mister Castle, featured on Vocalo’s “In Rotation” playlist this month, has been involved in the Chicagoland underground music community since the late ‘90s. What started out as going to shows and hustling to get his music out there turned into formative connections which ultimately drove his sound.

As a man of many talents, Mister Castle doubles as a producer when he’s not dropping rhymes. In fact, this is how he’s spent most of his time as Mister Castle. After crafting bars for years under the name Sin Castle, he grew into the producer role of Mister Castle.

“I began my journey as Mister Castle, but this time only making beats,” he explained. “I didn’t want to rhyme anymore, so I left that behind me.”

Upon finding inspiration to rap again, Mister Castle released the single “No Matter What” on August 9. The track opens with a retro, wavy sample giving way to Castle’s impeccable flow. His knowledge in both production and musicality is evident in the track’s layered instrumentation and vibey beat.

We heard from Mister Castle on his newest single, the importance of family and his essentials for good beats…

– Mister Castle on “No Matter What”

Where in Chicago are you from? What influence has living in Chicago had on your music, if at all?

I grew up in West Chicago, which is about 40 miles west of Chicago. I lived there until I was about 25 years old then moved to Pilsen. Living in Chicago and seeing the underground hip-hop scene was the influence on my music. At the time, artists like the Molemen, All Natural, Kenny Keys, Thaione Davis and Rashid Hadee were having shows. Just going to the shows and networking to try to make a name for myself was exciting. I made sure to have CDs, stickers and all the merch I was making to just get noticed. I didn’t care where these shows were. The Chicago hip-hop community at that time was like no other — so many talented artists and a lot of people I got to work with along the way.

Your producer name is “דוד,” which means “uncle” in Hebrew. What do the name and the characters symbolize to you?

I was looking for a symbol and a logo that would stick out and not be like anyone else. My name “David” is of Hebrew descent, so I searched how it was spelled and my alias was initiated off of that. Anywhere you see that symbol, whether it’s stickers plastered somewhere, a shirt, hoodie, a pin, a lighter, people are starting to get familiar with that. I have transformed that into a brand now; it’s something that I’m really proud of.

You’ve mentioned online you started out producing and slowly added your own vocals to your music. What made you want to start rapping?

When I began to make music in 1998, I started off rapping. I had a group with another artist Jelify, and we formed Turner Junction. He also rapped, but he made all of our beats as well. We were a one-stop shop, because, as a rapper working with other producers, it can become time-consuming and you’re always waiting for music to be sent. It didn’t make sense, because we were recording music quickly. I didn’t have time to wait for beats, so it was good that Jelify produced.

Soon after he left for college I learned from him how to make beats. Eventually, I ended up doing both as well over time. I took a long hiatus. I went by Sin Castle then, but when I wanted to rebrand. I was looking to change my name and have a new identity. I was older, I had children and lived the “adult” life, so I began my journey as Mister Castle — but this time only making beats. I didn’t want to rhyme anymore, so I left that behind me. I got the itch to rap again, and that’s how “No Matter What” came about.

In what ways are your approaches to rapping and production similar? In what ways do they differ?

I think they’re similar because they both begin with a feeling. When I write, it comes from a certain emotion I have that makes me want to write, and when I make a beat, the same thing happens. It’s easy to make music just to make music, but the best product always is when you’re off a feeling or emotion. Music is meant to be felt. Heard, yes, but the person listening to your music may identify with what you’re talking about. I get more out of someone listening to one of my beats and it takes them to a certain place where it’s like there’s no need for words. Where the music speaks for itself.

My rapping and production are different due to the fact that my production is not limited to a specific sound. I can really be more free… not that I can’t when I rap, but it’s less pressure when I make beats.

While we’re talking about production, it’s clear you put a lot of effort into crafting the beats in your songs. What are the three most essential things you think any good beat needs?

Number one, every beat needs a solid foundation, being the overall feeling and energy of the track. Without that, there’s no song. Number two, there needs to be transitions to the unexpected turn of the beat that the listener may not expect and gives you that “Oh wow” moment. Number three, Making the beat has to be fun. Once it becomes a routine, the beat becomes dull and it will not capture the art that you’re trying to release.

Your latest single “No Matter What” was featured on Vocalo’s on-air rotation this month. Tell us about the song’s creation and what you hope listeners will take away from it.

For months, I’ve been having the urge to rap again. It was one day I was at work like, “Man, I should just do it.” I had a beat in mind that I had just made around that time, and within 20 minutes the lyrics were written. I’m a big believer that when something happens so easily, run with it. There’s a natural feeling when writing when it just keeps creating smoothly and you know it just feels right. The hook I did later that day at home as I was preparing to set up my recording session, and I knew I had one.

This song touches on a lot of different things for me. “No Matter What” is a representation that you may do some things that some consider wrong, but the same person may think other things you do are right. I am releasing the demons of my past and looking towards the future, sort of a revival. In the second verse I’m speaking to my son, in hopes that he understands his father isn’t perfect and that I will guide him along the way to do just the opposite of what I did and know he is my priority in life. The hook speaks to accepting all the good and bad that has happened to me whether it was by circumstance or by another person and being at peace with it. I hope the listeners relate, and can see that, just because I make music, I’m still human. I just happen to express myself in the form of hip-hop.

You also released an instrumental album this year called Live From The 40. On Instagram you said the album carries a lot of themes of family, and the love and tradition within yours. What’s your favorite tradition your family keeps?

My favorite family tradition is just existing with one another. Over time, through the years, everybody goes through what they do, but at the end of the day, we can all come together as one and love as we always had. My uncles have been a huge inspiration to my music and have supported me throughout. The cover of this project is my immediate family. When you come from a smaller family, you embrace it a lot more.

Are there any Chicago artists you’d like to collaborate with in the future? Who, and why?

There have been many I’ve been in touch with and have expressed working with, but right now I’d say Philmore Greene and First Class Bee. They’re both different artists, respectfully, but I feel that their art combined with mine would create a whole different energy. Not only would I want to work with local Chicago artists, but also artists from other regions. Also, I’ve been wanting to branch out and do music with singers because I can take it there. I want to be challenged when I make music, and I think that would be something I would seek.

What are some goals you’d like to accomplish before the end of 2022?

I’d like to continue to work with new artists and create a sound for them that they’re not used to on their own. I love working with individuals who have the same work ethic as me and have it be organic, I never want to force anything. My main goal is to travel to another state or county to work and collab with another artist or artists. I want the continued recognition and to expand my audience to a worldwide level. One thing is for certain, I will continue to be consistent. 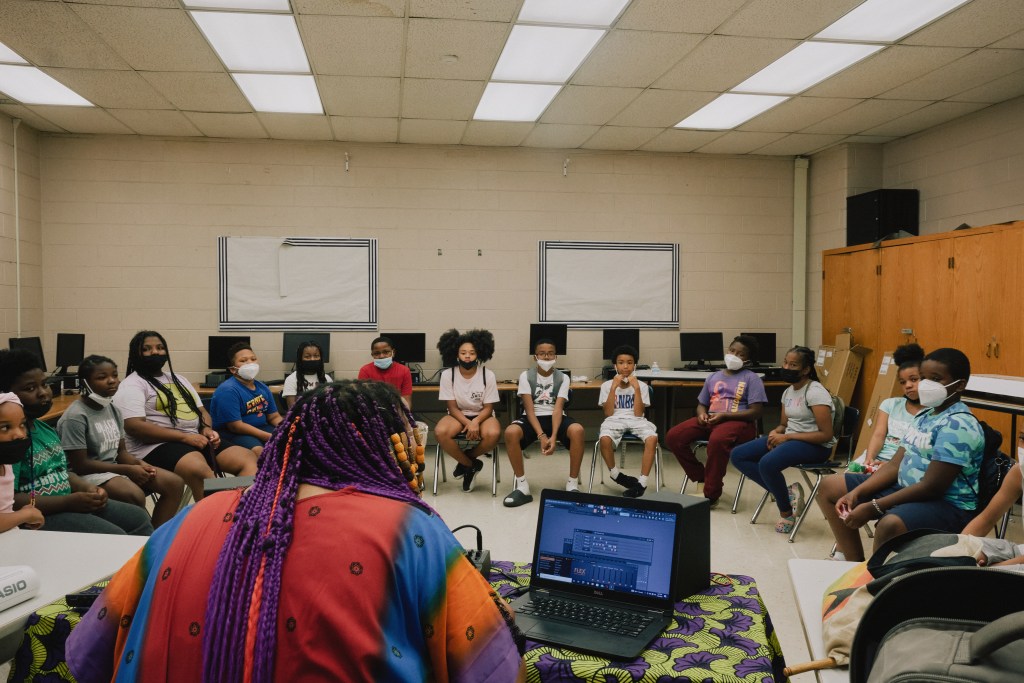 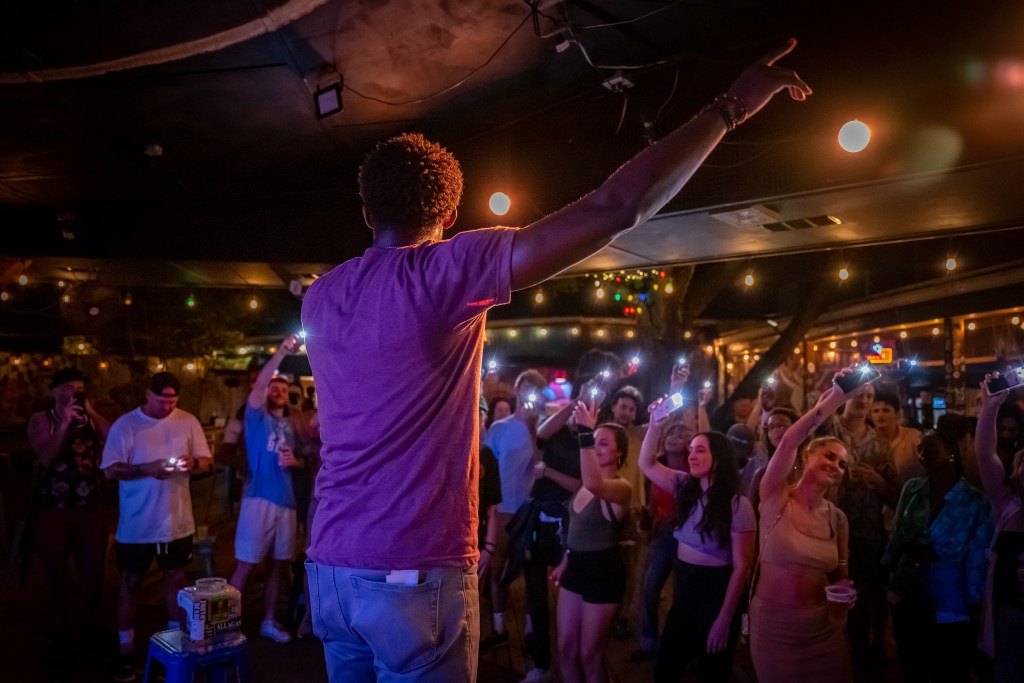