How Grace Kinter And Charlie Curtis-Beard Find Self Acceptance

A collaboration sprouted from their freshman year dorm in Chicago, Grace Kinter and Charlie Curtis-Beard reconnected in LA years later to create feel-good single “Chamomile Honey.” With five additional singles available for streaming (plus more unreleased), Grace Kinter is known for her dreamy, tear-jerking R&B jams. With albums from 2017 and 2019, Charlie Curtis-Beard also found recent success for his rap challenges on TikTok and his most recent single, “Nails Mint Green,” a catchy bop raising questions about the societal norms pertaining to masculinity.

The collaborators were featured on Vocalo’s April 2022 “In Rotation” playlist with “Chamomile Honey,” a song that features lyrics meant to spread positivity and self-acceptance. Kinter’s vocals soar over Halfspeed’s layered, gentle guitar riffs and snappy drums, while Charlie Curtis-Beard breaks through with his smooth, witty rhymes.

We got in touch with Grace Kinter and Charlie Curtis-Beard to chat about how they met, soaking up positivity and more!

How did you two meet? How did the idea for a collaboration come about?

Grace Kinter: Charlie and I met in our dorm in downtown Chicago in 2014. We played with the same musicians, who eventually connected us. The first song we ever recorded together was called “Saturday Cartoons,” which you can find on YouTube or SoundCloud. After I recorded the main chorus, I had the chance to freestyle a little. There was one riff that I did that made it into the song, and when I saw Charlie’s reaction to what I had done, I knew that we would be working together for a really long time.

Charlie Curtis-Beard: Grace sends me this really great beat to rap over, so of course I had to deliver. This one was a little homage to our old selves, and I’m sure freshman Grace and CCB are happy with us.

In your submission bio you said that “Chamomile Honey” is all about soaking up positivity. Can you tell us more about that? What are some things you do to stay positive?

GK: When I say soaking in the positivity, I’m really talking about… the bath. I’m currently living in my first apartment in LA, and it has the deepest, most divine bathtub you could ever imagine. Ever since I’ve gotten here, I’ve been doing meditation in the bath and really connecting with water, because it holds so much and is such a source. I imagine myself in this heavenly water and I lay in a trance as it drains out, imagining every doubt, painful memory or anxiety disappear with it, so I’m only left in literal holy water that I created. And if I really want to up the vibes, I add chamomile and honey to the bath.

How does the LA music scene compare to Chicago’s? What do you miss most about Chicago?

GK: Charlie and I both moved to LA during COVID, so, universally, the music scene suffered, rebuilt itself and adapted. In some ways, it doesn’t even feel fair to compare Chicago to LA because of that circumstance. After COVID, there’s been an explosion in independent support, collaboration, media outlets like TikTok… we’ve all had to rewrite the book and get creative with how we get our art to the masses. Both cities have so much to offer for a musician and we could go [on] about the pros and cons forever, but I think if people go with their gut on a place that brings out the best [in] them, then they will make the city work for their career or art.

CCB: The LA music industry is wild! My friends out here are just gracing the cover of Spotify editorial playlists. A lot of my music friends are signed to these crazy cool labels, but the community is smaller than you think. Everyone kinda knows everyone, so there’s still a sense of community. Though Chicago’s scene was a lot smaller, the community aspect was still there. That’s the cool thing about music, is that it always brings about a community.

Charlie, based on your TikToks, from your ads to remixes, it seems like you can rap about almost anything! Have you always made up little raps as you go about your day?

CCB: This is funny. I really do rap all the time. I definitely sing random stuff through the day, but I like TikTok because it’s helped me challenge myself when it comes to my writing.

How has TikTok helped you grow as an artist?

CCB: Before TikTok, I didn’t do music a lot. I thought I did, but then I downloaded TikTok. I started working in the studio every single day. Making TikTok songs and always writing really pushed my artistry to another level. Now I kind of look at how I approach music completely different. I know what’s catchier now. I know how to get people’s attention through lyrics better. I know how to say what I really feel a lot better. And as I grew on TikTok, all the numbers kind of just naturally grew with it. Now I’m in a place in my life where I’m just living the dream. I’m very blessed.

Grace, have you always been a singer? What or who got you into singing?

GK: I have always been a singer! And I love this question, because my dad is who got me into singing. He was a… jazz guitar player and would always play jazz: Aretha Franklin and Etta James. He was also a serial bragger who wanted a protégé so the minute he found out that I could even slightly sing, music just stayed around. I taught myself piano and wrote my first song when I was 17. I’ve been writing songs ever since, even though my discography says otherwise. There’s been a lot of name changes, manager changes, songs that were taken down. I’m rebuilding that as I grow and learn to be kinder to myself. But man, do I love singing. It is the only thing that transcends me.

Can you tell us a little bit about your creative process? What helps you get in the creative mindset?

GK: The way I write songs is to start with a chord progression, instrumental or beat, then to just plug myself in and freestyle over it with non-words — “oooohs” and “aaahhhs” — until a melody sticks. Then I go back and put words to it. Then I go back and layer in harmonies and background vocals. But sometimes I get this jolt of creative energy where I have to drop what I’m doing to manically write lyrics, poems, essays… really just write. It’s like a flow will knock on my brain’s door and demand to get out. And those will later inspire the best lyrics and themes for songs, because they come so raw compared to me sitting with a song and mechanically putting words and syllables in to match a melody I made.

Tell us about how you founded Fux With Magazine. What kind of magazine is it? Why did you want to start it?

GK: I created Fux With Magazine in 2020, because I felt there was a disconnect between blogs and independent artists. I found the process of pitching your music draining and disingenuous. And I hated that so many of the gatekeepers to these outwardly “hip” blogs were just cis white men profiting off of (often BIPOC) artists or leaving BIPOC, LGBTQIA and femme artists out all together. I didn’t want my face or name attached to it, so I let it be fairly anonymous for the first year and a half. All I wanted was to make subjects feel seen, heard and beautiful. I’ve successfully done that for every article that has gone out, and I really pride myself in that and hope to keep the momentum going!

Charlie, you’ve garnered a lot of attention for fighting back against societal norms on masculinity, specifically with painting your nails! What is your favorite color to paint your nails and why?

CCB: My favorite nail color is probably the color that matches my fit. But I do tend to veer towards cooler colors like greens, blues or purples. I think it matches my skin tone best.

What would you say to someone who is worried about losing a sense of masculinity with what they choose to wear, listen to, etc.?

CCB: You can define your own masculinity however you choose. I like to say that I’ll go paint my nails in order to feel handsome. Societal norms are weird anyways, so you might as well just do whatever you wanna do. I think it can be a little daunting at first to take risks as men when it comes to fashion, jewelry or doing other things that go against the masculine norm, but finding your own comfort in yourself brings about more happiness in the long run.

Introduction and interview by Milo Keranen 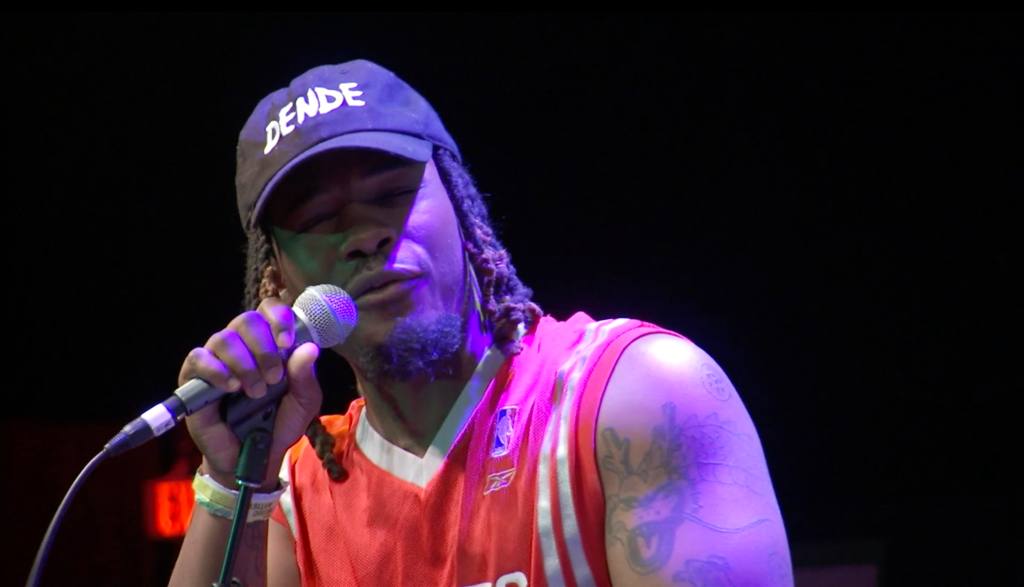