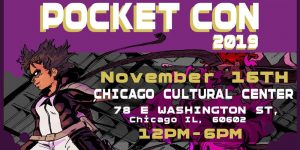 Pocket Con is a free single day convention for Chicago youth brought to you by a partnership between the Chicago Public Library, Free Write and LOKari Productions. It focuses on work by artists of color, particularly African American authors and artists, as well as comics with a primary character who is Black. Pocket Con also features work in the comic genre by other underrepresented groups, such as women, Latinos, LGBTQ, and other minorities. We have a strong belief in Indie comics and publishing, and welcome small press and self-published authors as well as those involved in related forms of expression and interest, such as webcomics, animation, small-budget film-making, video game design, and zines.