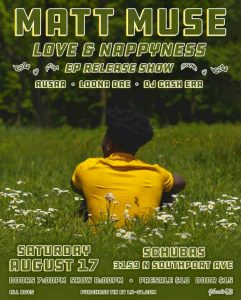 A rapper & producer from Chicago, Matt Muse burst onto the Chicago music scene with his performance at the 2016 “AAHH Fest!” alongside J. Cole, Common, Vic Mensa, The Roots & more. With a bold presence, dynamic lyricism, & a one of a kind live performance, Matt Muse has become a mainstay in Chicago Hip-Hop while certainly moving toward national recognition.

On July 13, 2018 he released his debut album Nappy Talk & headlined the Goose Island Stage at the Taste of Chicago. The album received much acclaim and ranked 44 on Lyrical Lemonade’s Top 50 Chicago Project’s of 2018 list. In anticipation of the album, Matt was featured on Fox 32’s Good Day Chicago on July 10th where he was interviewed and performed the song ‘Shea Butter Baby’ (a single from Nappy Talk). Two days later he appeared on The Jam TV Show to promote the album and perform the lead single ‘Getting to It’.

In October of 2018, ‘Getting to It’ was featured on NPR radio’s Buried Treasures segment that highlights promising upcoming musical talent across the country. The Chicago Tribune published an article on Matt Muse & Nappy Talk in June of 2018, opening with the statement “’Nappy Talk’ is next level”.

In a July review of the album, the Chicago Reader said “his cool-in-the-pocket affection on “Getting to It” is the stuff that turns rappers into stars.” & Elevator Mag published a feature on Nappy Talk stating that “the project drips with lyricism and swagger that only a true Chicagoan could bring”. Matt was also interviewed on WGN Radio’s Corner Store Podcast in August of 2018 to discuss the album and his background in hip-hop.

Matt has also been heard/featured in Sway in the Morning, Power 92 Chicago, The Chicago Reader,Stereogum, Passion of the Weiss, Fake Shore Drive, These Days News, and more.

Currently, he is set to release his sophomore project Love & Nappyness on August 9th, 2019. Each song on this six song EP focuses on a different type of love (God’s Love, intimate love, friendship love, self love [two songs], & familial love) and Matt’s personal experience with said love type. The EP represents a more vulenarable and stripped down version of Matt and a new overall sound for the evergrowing rapper, while staying true to his superb lyrical abilities. He released a self-directed music video for the lead single ‘AIN’T NO’ on June 26th, 2019, and the song is currently available on all streaming services.