Demetruest Is Proud Of Their Intersectionality

Chicago singer-songwriter Demetruest is not afraid to let their true colors shine, using music and artistry to express their most genuine, extravagant self.

Jill Hopkins sat down virtually with Demetruest to chat about their new “DIRECTION” EP, collaborative processes, creative representation and more. Stream or read the full interview below.

Jill Hopkins: Chicago artist Demetruest has a new EP out. It’s called “Direction,” and we’ve been spinning some tracks from it on Vocalo. And we’ve got a little surprise up our sleeves for all their fans – a live performance. And to talk about all of it, joining me via Zoom is Demetruest. Hello! How are you?

JH: Thank you for joining me this morning. Talk to me about the live performance, what did you perform for our listeners?

JH: And when you’re deciding what to curate for a short set like that, I imagine you’re going to want to show your range. How did that selection process go for you?

D: I love turning songs on their heads. So I love taking a song that a female artist does that’s has a BPM of 125 or something and then slowing it down to like 65 or 75 BPM. And I think it just evokes something different from the listener, it allows them to be pulled into the experience. So, starting off with “Devil On My Back” was definitely a very intentional choice for me. It’s very upbeat. And it’s one of my get-up-and-go songs now. And yeah, I wanted to be like, “Hey, like, let’s kind of trick the audience a little bit and bring them and be like, what is that?”

JH: I don’t think anybody needs tricking to listen to what you’re laying down. I chose “BLOUSE UNDONE” as one of my top five favorite songs of the month a couple of months ago. And it got me from the title, I think I felt like I was right there with you from the title alone. Tell me more about that song and the mood you want to evoke with it.

D: Yeah, so that song came to me just as a beat. And it was actually titled “Nola.” I got it from a friend of mine named Eddie Burns, a producer of mine who produced that track and some other things, great friend. Anyhow, he sent me the track and I was planning to go to New Orleans in a few months after that. So I said, “You know what, I’m gonna pop this open when I’m in New Orleans, and I’m gonna write while I’m in that place.” And so for New Year’s 2020 I went there with some friends. And that’s where I started unpacking this song.

I saw a lot of just Black people, you know, pedestrian Black people just living their lives day in, day out. And it just started making me think about all of my family and the lessons I’ve learned, you know. I have three younger brothers, and my mom as the oldest, she’s always like, “Hey, like, don’t forget about them. Hey, have you checked in on your brothers?” You know, I kind of have that role. So, I wanted to get into talking about the celebrating that role for all that it is, but then also the pressures that come along with that role as well. And breathing through that and taking a moment, and that’s where the “blouse undone” came. You know, that picture of just sitting back and being like, “Huh, the day’s done. We still got more work to do, but…”

JH: I want to talk more about your collaboration process. You’ve already mentioned Eddie Burns, who’s a friend of the station. He’s a great talent, he and his brother. Because Chicago’s such a collaborative town, each person has their own set of standards and metrics in choosing how and who they work with. What are yours?

D: Mine definitely stems from us understanding that we are both humans, and that we both have a range of skill that we can add to each other. But we also have limitations, because we are humans. Just recognizing and being aware of that fact, you know. It’s more than me calling someone up and saying, “Hey, do you have that beat ready for me?” It’s also checking in with them and saying, “How are you doing? How’s your spirit doing?” I start from there, because my conversations that I have with people they oftentimes turn into material for me. So I just try to get out of the way of that and, as hard as I can, just let the ego go, and allow the relationship to dictate where we’re going.

JH: Can you talk to me about Heylo Sessions? I’d love to hear more about it.

D: So Heylo Sessions started as an idea in 2016. Two really good friends of mine, Dan and Lowe – who are cannabis experts in the Seattle area, Seattle, Washington – they were going to be starting their own cannabis vape company, and they asked if I would come on, to not only help extract and make oils for them, but also to be a social media expert on the team. So that turned into a creative director position for me, and I started Heylo Sessions, which is a community event that blends education, music and cannabis together in one night.

Everybody comes out. You’re educated about the science behind cannabis and terpene education, things like that. And then you’re also taken away by the musical act, you know, whatever they’re bringing. We’ve had rock artists, hip-hop artists, jazz artists, instrumental artists come and share a space with us. And, yeah, we were able to do I want to say between 10 and 15 shows, within a, like a two and a half year span. And then it directly helped me, for where I am today in life and what I do for work.

JH: Is there any plan to bring something like that in Chicago? We’ve really missed out on the last year of legalization-focused events.

D: There are some exciting things that are coming up in the near future. I’m looking forward to making ways for not only independent artists, but specifically Black and brown artists, and giving them the spotlight, giving them the resources that they otherwise wouldn’t have had access to. So I’m really behind the scenes right now, trying to make all of that possible, but I am literally so excited. I have all the support in my corner, and we have all the talent right here.

JH: I also love your aesthetic, and I love how you blend the more botanical elements, but there’s also a lot of glitter and a lot of, like, cool urban edge to it. How did those two parts of you become kind of this outward representation? Of, you know, what Demetruest has got going on.

D: Every year that I’m alive, I figure out more and more who I am and what I’m doing here. I think that’s what we all want. But I think both of those things that you called out, they kind of speak to my intersectionalities of being a gay, Black man, who’s also gender non-conforming–I use, they and he interchangeably. I love playing with the feminine side of myself and the masculine side of myself. Growing up on the South Side of Chicago, I wasn’t always able to express that, or felt safe enough to express that with other Black men. So I knew that I wanted to: I wanted to express that more with my music and with my artistry, and just be confident in who I am.

Because there’s so many other people like me, that are out there being, like, “I just need more of that,” like, “Where are all my South Side gender non-conforming men out there that are comfortable in their skin?” That really just matters to me a lot. You know, people’s identities, like, there’s so many of us, and we all have a lot to say. And I think there’s space, there’s room for all of us to be heard.

Transcript edited for length and clarity by Morgan Ciocca 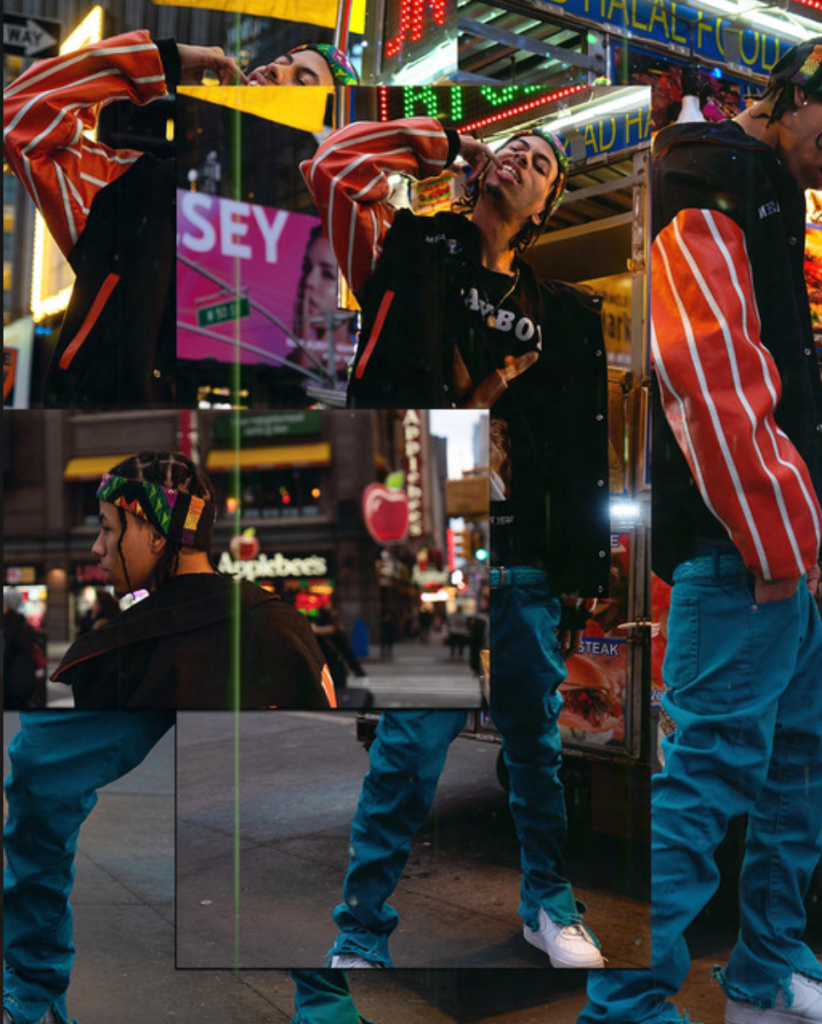 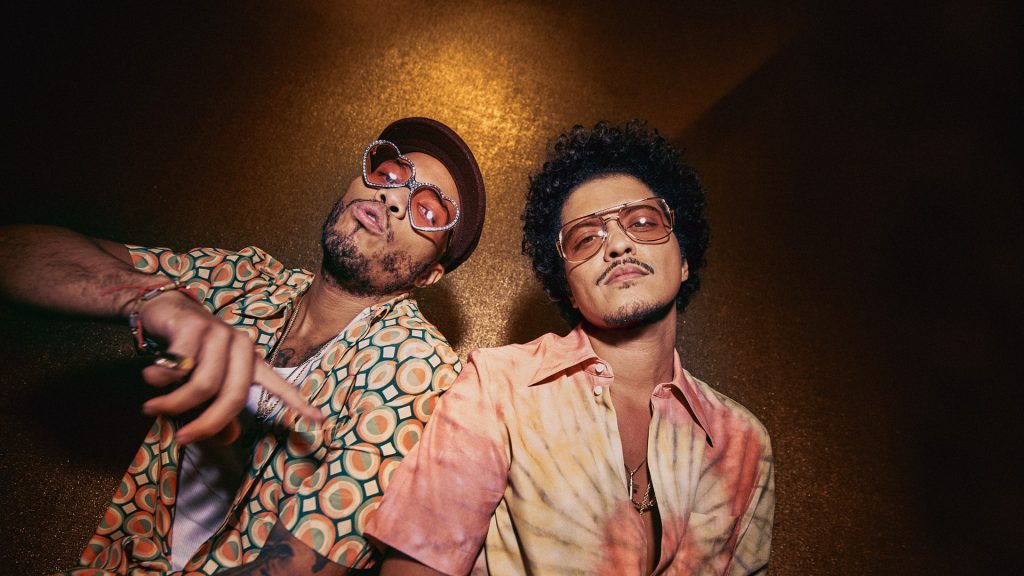