zakkiyyah najeebah dumas-o’neal searches for deep connection and community through her artwork. As the program and engagement manager for the South Side Community Art Center, she regularly builds this same sort of community connection around the arts — while preserving the legacy of Black artistic achievement.

Hyde Park-based artist, curator and educator zakkiyyah najeebah dumas-o’neal currently serves as program and engagement manager at the South Side Community Art Center in Bronzeville, the first Black arts institute in the country. The center, started by four Black art students in the 1930’s, stands in its original building, with all the remnants from those who were there before.

“There’s a lot of history that’s attached to this space,” she said. “I feel like it just deserves so much more support and appreciation, not just locally, but nationally.”

While the South Side Community Art Center showcases work from living Black artists in addition to work from collections throughout the 20th century, it isn’t just an exhibition space for dumas-o’neal; it’s a place for the people. It’s a meeting space for artists and a community

This theme of connection is prominent throughout all of dumas-o’neal’s projects. In the fall of 2017, O’Neal co-founded Concerned Black Image Makers, a collective for Black photographers and filmmakers to further build their community. Inspired by other Black art collectives like AfriCOBRA and OBAC Writers Workshop, CBIM serves as a space for Black artists to collaborate, exchange ideas and uplift stories told through a diverse Black lens.

In her own work, dumas-o’neal searches for connections with friends and family. She primarily works with photo and video collage and assemblage to create visual representations of her perception, emotions and memories, which she describes as nonlinear and even fragmented at times. Art has served as a tool for her to navigate familial relationships and her place in the world.

“I see my practice as kind of like a visual embodiment of the way that I received those emotions, the way I perceive memory, the way I feel memory and feel people in my life,” she explained.

For this installment of “This is What Chicago Sounds Like,” we heard from zakkiyyah najeebah dumas-o’neal on the history of the South Community Art Center, the richness of Chicago’s South Side and using art as a form of connection.

What kind of art do you make?

A lot of my work is about me trying to feel connected, or find connection, to family and friends, or my community. I was adopted and got to know my biological family as I grew up. And so a lot of that kind of comes into my work as well, in terms of thinking about my place in the world, questioning things around family connection. A lot of my work is collage or assemblage-based, within video and photo, because I ultimately feel like all of these feelings are very non-linear. And the way I come to receiving information about my family, and deeper information about my friends or my community, often happens in a way that is fragmented or non-linear. And I think that’s really beautiful.

I see my practice as kind of like a visual embodiment of the way that I received those emotions, the way I perceive memory, the way I feel memory and feel people in my life.

I was born in Chicago, I grew up in the northwest suburbs, but I spent a lot of time here over the summers with my grandmother. She lived over near 67th and Stony. My grandmother and my grandfather, they had a snowball business. My mom would help them, and because of that we would spend a lot of summers also helping. A lot of family picnics in Jackson Park, specifically. And just being outside.

I live in Hyde Park, but I work in Bronzeville. If you talk to people from Chicago, they’ll say that you’re not from Chicago if you didn’t go to Chicago high school. But you know, I’m like, “This is my home.”

What do you love about your neighborhood?

Bronzeville or Hyde Park or South Shore, or just the South Side in general, I think about the legacy of Black arts movements that were really vibrant here, and are still vibrant. And I feel like we’re also kind of experiencing the remnants of those movements and residue of those movements in really beautiful ways today. And I know it’s because of that, that I’m able to thrive within the work that I’m doing.

Tell us about the South Side Community Art Center. What is the history of this place?

The South Side Community Art Center was founded here in Bronzeville by four Black art students in the 1930s. It’s the first Black arts institution that was created in the country, and is the last remaining institution that was supported by the WPA Grants. WPA Grants were essentially started by Theodore Roosevelt. The United States was interested in re-establishing specifically cultural institutions.

And so a group of artists, who were attending SAIC at the time, Black artists, were like, “Why don’t we come together and start our own space? Because we want to exhibit our own work. We want to support our artists.” And so they were able to buy the space with grant money in 1938. But then fundraised to renovate the building, and it officially opened in 1940 — and Eleanor Roosevelt, of all the institutions, she chose this one to do the commencement ceremony at. So that’s an interesting part of our history. AfriCOBRA was formed here. OBAC Writers Workshop was formed here. It was a meeting space for artists. People like Gordon Parks had several exhibitions here, he had a darkroom in the basement. Artists such as Theaster Gates have gotten their start here, Kerry James Marshall got married here. So there’s a lot of history that’s attached to this space. And I feel like it just deserves so much more support and appreciation, not just locally, but nationally.

What do you do here? What is your role?

We exhibit the work of living Black artists. We also showcase exhibitions that feature works from our collection. I see this as a really important, not just exhibitions and art space, but also just a community-rooted space for socializing and welcoming people.

Tell us a little bit about your work outside of the South Side Community Arts Center. You  mentioned “Concerned Black Image Makers,” what is that?

I also co founded and co-organize a small Black arts collective called Concerned Black Image Makers. And we do a lot of work with Black artists who are working in photo or working in filmmaking and cinema. Through the work I do with Concerned Black Image Makers, as well, because that project kind of started as a way to build community with other Black artists who maybe were asking similar questions. Or maybe they were also in search of community to kind of talk about issues or challenges, or even just things that they love about art-making and just being human, and seeing how those things show up in the work that we do.

It is a labor of love. Because it’s not easy… I think, when we initially started, we were really inspired to be honest by previous collectives from the Black Arts Movement, like AfriCOBRA, OBAC Writers Workshop, the Kamoinge Workshop that started in New York, and it seemed really utopic. But it’s not, it’s really challenging to work collaboratively with people. There’s different personalities. Some people have different value systems, not everyone communicates the same way. So it’s definitely been challenging and troubled, at times. But I also see that as a testament to just continuing to do that hard labor, because it’s not easy. Especially if you’re leading something or  you’re organizing something in a leadership position, it’s very, very difficult. And so I say, for me, another reason it’s important is because I think it’s a testimony to continuing to work through those differences, while also having a common goal of wanting to convene and have fellowship.

How has Chicago influenced your art?

I feel like Chicago has sculpted me into a really hungry artist, and a more rigorous artist that works with intention. Chicago is one of those cities where it’s like, you really have to kind of prove yourself, in a way. And maybe not materially, but just really commit yourself to the work that you’re doing and commit yourself to building relationships. And not only being in community, but fostering community with other people. It’s also, it’s a tough city to navigate. I feel like it’s made me stronger. It’s made me a fighter. It’s really positioned me to not compromise myself as an artist or not forget where I come from, or why I’m doing this work. And I feel like that has kind of been a steadfast thing. It’s also made me feel more confident. 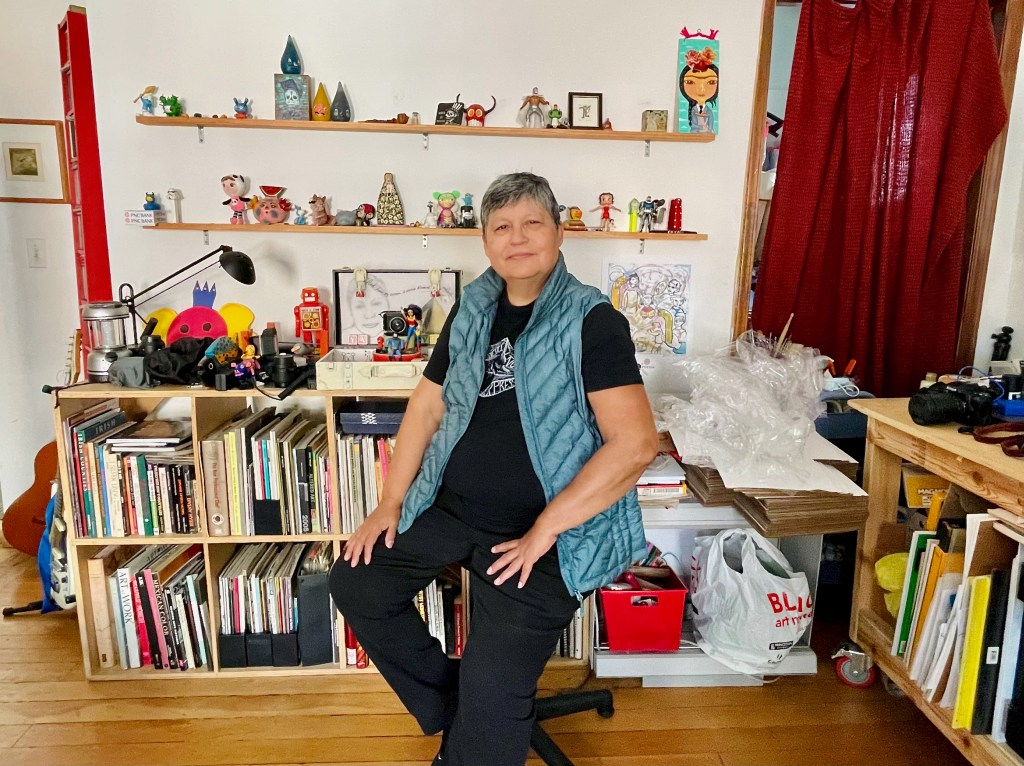 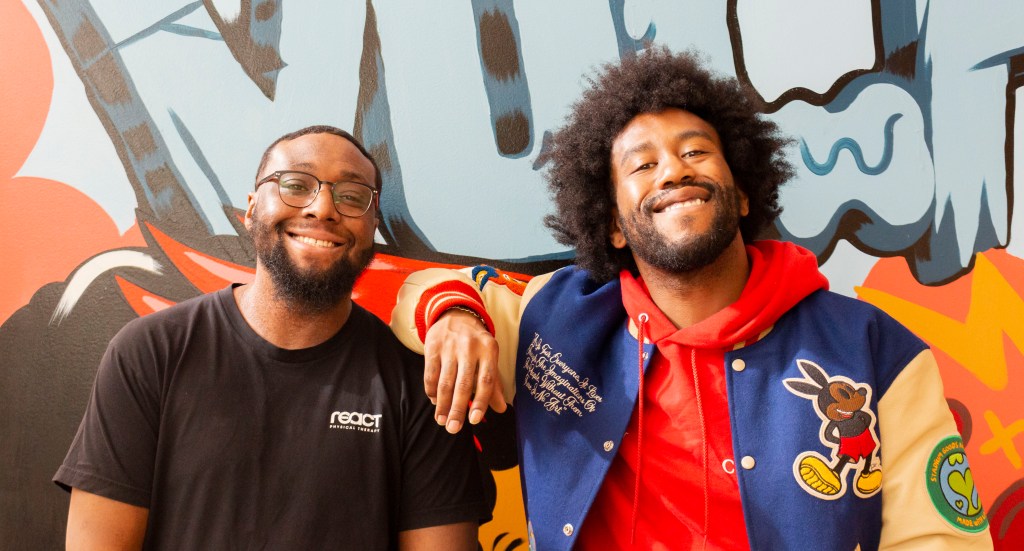