Xail Hernandez is the community repairs manager at Working Bikes. The non-profit organization collects, restores and redistributes bicycles and tools, to anywhere that needs them. Her work empowers people worldwide with access to transportation and the freedom to explore their environment. Working Bikes also hosts community volunteer events, like shipping days, where anyone can learn to fix and prep bicycles for shipment to one of the many countries they partner with.

Already an avid cyclist, Hernandez’s interest in mechanic work was sparked when she repaired her sister’s bike in 2013, eventually becoming a full-time bike mechanic in Tucson, Arizona. She says her natural sense of immediacy lent itself to cycling and she became enamored with the independence it offered.  A few years down the road, Hernandez was planning a move to Chicago when, by chance, Working Bikes called her old shop looking for a mechanic. Hernandez was hired, moved to Chicago and started at Working Bikes, using her passion to help thousands.

Apart from providing reliable transportation and reducing waste, Hernandez also wants Working Bikes to help other women stand out or gain skills in typically male-dominated spaces, like the cycling community. To do this she helped start a volunteer night specifically for BIPOC and Queer persons.

“It starts with the bicycle,” Hernandez explained. “Then it just starts helping yourself emotionally, mentally, physically, and, if you let it… it can continue growing.”

For this installment of audio interview series, “This Is What Chicago Sounds Like,” Xail Hernandez spoke about Working Bikes’ mission, the empowerment of cycling and passing on her skills to others.

What is Working Bikes?

Working Bikes is a nonprofit organization. It’s like a bicycle shop, but not for profit. It’s huge! Our mission is to distribute bicycles, give bicycles new homes as tools of empowerment. Either you can purchase that bicycle, you can either bring your bicycle for us to repair it, you can either come and volunteer and use the last hour and fix your bicycle and then just go out there and keep pedaling. I know bicycles led me all the way to here, but honestly, if you let anything just take you into a journey, you know, it really does. So así, go with the bicycle! From bicycle mechanic to bicycle riding… all of that, to now bicycle mechanic instructor, it’s just taken me to so many places.

How did you become a bike mechanic?

It started with bike riding. I hate waiting. I’m a little impatient. I just… want to get things done now, así, ya! Rápido! Entonces, por no esperar, I think it was my sister’s. I found a bike, put air and rode it for the first time, I remember, maybe like almost three miles, and I just felt so accomplished. That was like 2013, maybe. And ever since then, I was like, “Oh, I don’t need a car, I don’t need the bus. I can just ride my bike.”

There was a lot of trial and error, a lot of flats, but then I became an expert in fixing flats. So ever since then, I started bike riding.

Where did you live before Chicago?

I was in Tucson, Arizona… transitioning slowly but surely to Chicago. I had already bought a one-way ticket, I was on my way here, but other things fell through. And then, funny enough, the current executive director [of Working Bikes] calls. It’s called Bicycle-Inter Community Art and Salvage [at the time]. I learned mechanics so I can transfer those skills to the community. The executive director said, “Hey, we’re looking for this one mechanic that applied years ago. Do you know where they are?” And they said, “No, that person doesn’t work here, but we just so happen to have this other mechanic that… is about to head to Chicago,” and that just… opened up. I just, like, landed here in Chicago, not knowing that it was in the middle of Pilsen, La Villita, North Lawndale.

What was it like when you arrived here? What neighborhood did you land in?

Chicago has been nothing but amazing. I was able to go to DePaul, got a really good job here at Working Bikes. Everything just set up in front of me as just very welcoming. I remember just going, I don’t know what I was doing on bus 49, but I went all the way to Evanston and then all the way to 95th. I was such a tourist! And then just seeing like the, así como, the differences of the people who were sitting in and how I was feeling throughout the whole ride.

Pues, en Pilsen! Y cuando llega Chicago for the first time, I didn’t even know it was a Mexican neighborhood. I just happened to land there, ‘cause a friend of a friend, …para alla conocemos gente and I remember showing up on 18th Street and just being like, “Oh, I don’t think I moved!” The experiences have really opened up my, así como pienso, the way I think. And that was the first embrace I felt from Chicago. Sense of belonging matters. Y pues si, fui bien recibida. I’m from Sonora, Mexico. Y dije, when I first came here, I wanted to be a teacher, and, man, people here fight for what they want and what they need. I remember coming in here when the Chicago Public Schools teachers strike was happening. It’s just like, you feel the intensity, the people just being very, very present, you know?

What is the history of Working Bikes? Do ya’ll have community programs?

Working Bikes started back in 1999. And it started just by, you know, Lee and Amy collecting bicycles and being like, “Hey, these are working bikes! Why are you throwing them away? Why are they going to get scrapped?”

We have a museum of old bicycles on the ceiling, which is pretty cool. Pero sí, son muchas bicicletas! I’ve seen its impact both locally and internationally. The bicycles that we collect all throughout Chicago, which are a lot of bicycles, we try to donate them back “as-is” so they become learning opportunities for the bike shops in Africa or in El Salvador, trying to be like, here, you have a program, let’s give you some bicycles. We send them bicycles.

We have really cool shipping parties. That’s when we have volunteers come in. You don’t need to be a mechanic, we’ll show you how to prep a bicycle and then load it up in this container. A container we’ll load up to like over 400 bicycles, plus parts and tires. And then, on and off, we’ll have some other partnerships, like either in Fiji, we were trying to connect with a really cool bike shop in Mexico City called Bicitequas. I had the privilege to see one load up and being unloaded in El Salvador… and the impact that it had, it was amazing. The people really use bicycle mechanics to make things work. And when they don’t have the tool, like how we have abundance of tools and parts and wheels, they don’t have that privilege. They make the tools to make the bicycle component work. So that’s the kind of mechanic I want to become, you know, make things work, and then pass on those skills. It’s like, “Oh, you want to learn how to fix a flat? Let’s do it.”

It starts with the bicycle. And then it just starts helping yourself, emotionally, mentally, physically. And then if you let it, if you’re aware of it, it can continue growing. And one component that I’m trying to bring in is the educational component. What I’m trying to do here, for example, BIkePOC and queer night is every [Thursday], 5 to 9. And the purpose of it is to include people in our communities who are very pushed away and very male-dominant spaces. I know I feel that way in regular bike shops. You get familiar with the small components, and then maybe bike stripping, getting acquainted with the tools and using an appropriate tool for the appropriate bike component, and just working our way up in bicycle mechanics.

How has being a bike mechanic shaped you?

It’s just like this constant love and self-care that you keep doing with bicycles. And I think, bicycle mechanics, it deepens our self-love, because when I fix my flat and I keep pedaling… I just feel so accomplished. I don’t know if you’ve heard this saying, probablemente, “Calladitate, es más bonita.” It means, “the quieter you are the prettier you look.” So that, to me, hearing it all my life through generations, having that bicycle was a tool for me to break that. And then using the bicycle, having to take space for my own safety, it made me feel like, “You know what, if I can take a space, a whole lane, because I have the right to a whole lane as a bicyclist, and as a bicyclist woman… I can do this in other spaces, too.” So it just transfers to different aspects of your life. And through BIkePOC and through teaching, like, what else can you fix? What else can you do with this skill? And how will you share it? 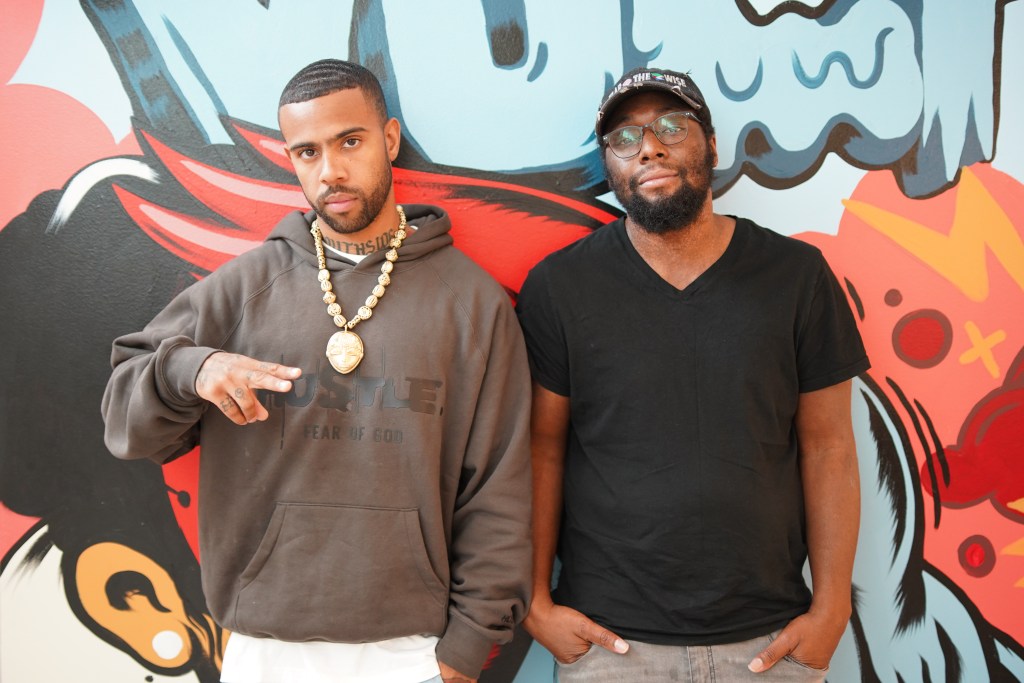 Hoofy Baby Wants To Create Unity With His Music